Renewable energy plants are usually connected to an already existing transmission line in what is usually called a T-connection. One of the particularities of this type of connection is that, in the case of having a line differential function (87L) enabled, the protection relays must support its three ends and be able to form a ring between them.

The physical media by which the information is transmitted is, in principle, indifferent. However, at a functional level, it is no longer sufficient for one end to receive information from the other. Each end must receive data from the other two and ensure that the fault is on the line to be protected and not outside it. 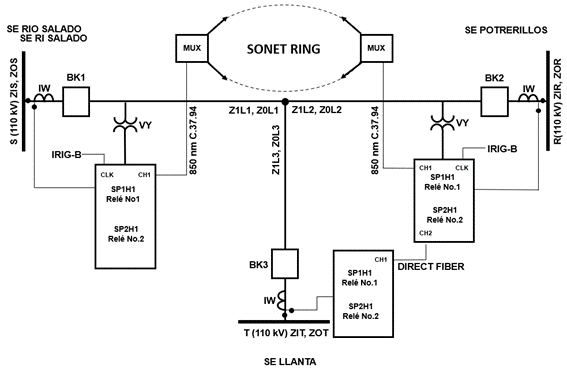 Regarding teleprotection schemes, POTT (Permissive Overreaching Transfer Trip) or PUTT (Permissive Underreaching Transfer Trip) schemes can be used, depending on the length of the sections. For short lines, or situations where the farm connects close to one of the ends, it is better to use PUTT. Its great advantage is that any fault on the line will trip Zone 1 (Z1) at all ends, ensuring performance. DCUB (Directional Comparison Unblocking) schemes are also often implemented together with directional function (67N), as the name suggests, with the same operation as described above: receive acceleration from the other two ends and see a forward fault.

Regarding the selectivity study, the Infeed Effect of the installation in the event of line faults must be considered, as this tends to gain strength as the relative power of the plant increases with respect to that of the grid at the connection point or T-point. For installations with an exceptionally low relative power with respect to the grid or to the generation, it is expected that the direct current contribution in the event of a line fault will be extremely small (not much more than 150% of the inverters' rated fault current), sometimes proving insufficient to generate forward or backward function pick-ups. In these cases, the Weak Infeed condition is used, which only requires external acceleration on both ends to trip. For this, it is necessary to either implement a logic that determines the direction of the current or to use a very sensitive directional step that does not cause tripping, but only determines the direction.

The line differential protection in three-terminal schemes in renewable power plants must consider the Infeed Effect, the Weak Infeed and establish the logic for receiving information from two ends instead of one, ensuring at the same time that the fault is on the line to be protected and not outside it.